Eight was great! But did not come without some challenges, complete with hagglers, sickness (luckily not me), and odors. On the bright side, got to support some amazing women, got some quality time with some of my favorite remotes, and explored some new places. 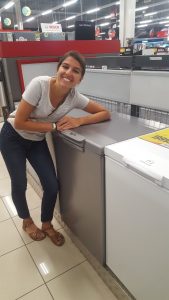 Thanks to you all amazing people at home and travelling with me, we raised $875 dollars for Amal Non Profit, the women’s training center. Hands down, this organization has been the best part of Marrakech. On Monday, I had the pleasure of spending the morning with Kenza, the Amal director, at an Electroplanet. We purchased a new fridge and freezer, and had some money left over for additional utensils. Crazy how far our money can go here.

I first delivered the money to them. Had to take it all out in cash and because you can only take a small amount from the ATM at a time, had to stop at multiple. I swear if anyone was following me, I would’ve been mugged. Amal has two locations, I went to their restaurant in the neighborhood of Gueliz. I was introduced to the whole staff there (all beautiful people) and they clapped for me. I felt extremely uncomfortable, not trying to be a hero, just supporting a cause I believe in. They are the superheroes for changing the lives of women every day.

Next, Kenza and I had our shopping extravaganza. I really enjoyed getting to know her and hope we will stay connected in the future. We then returned to the restaurant and shared a delicious meal. The appliances were delivered the next day, I got photos J

All in all, this experience with Amal proved my passion for women’s empowerment. Furthermore, Amal’s model truly sets a standard for non-profit organizations. I plan to write a piece on how they work and what I learned soon, stay tuned! Here’s to hoping I can do more projects like this in the future. 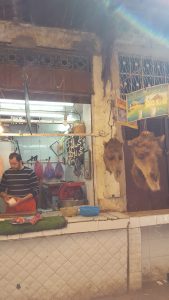 Fez is another major city of Morocco, and it’s due north of Marrakech. Two Remotes, Simone and Tim, and I took an hour flight (roundtrip was only $52). We arrived around 6pm and the three of us taxied and ran to our hostel to get to work. Hostel was inside the medina walls, thank goodness for a few key signs or we would have been hopeless.

First introduction to Fez, from hostel: “when you shower, open the drain and then close it when you’re done. The sewage smells and it wafts up into the room”. Minus the putrid and nauseating smell in the bathroom, there were blue and red painted on the wall above the sink to show hot/cold sides, the lock was on the top edge of the door, it was called ‘Moroccan Dream’ and it was probably the farthest thing from a dream. Would I stay there again? Probably. Quirks aside, there was a bed and decent Wi-Fi. And it was $9 a night.

A huge downside to Fez: the hagglers in the Medina. In summary, no person helps you for free. If you look the slightest bit lost, there will be some man in your face offering directions. Unlike in Marrakech, they do not take ‘no’ for an answer. We got called ‘stupid fucking tourists’ and later, someone grabbed my friend’s hair as if to condemn her for having it showing. Simone and I were trying to find somewhere to look at the tannery and a guy followed us, telling us certain places were closed for construction and we had to go to his place. None were under construction. We finally found the shop we wanted to view the tannery from and they walk you in like they are just showing you their shop. You get to see the tannery then they pound you with offers to buy things and insist on a tip on the way out. We had one shop owner try to convince us that 150 dirhams for a pair of sandals was standard and that his 110 dirham offer was a steal. He was quite aggressive about it. We found a hole in the wall place that sold the exact same pair for 90 dirham. At night walking back to the hostel, we had multiple men try to convince us that the way we were trying to go was blocked off and that they had to show us the way. This was never true. But they would follow us for uncomfortably long times. Even the children get involved. The problem is if you accept any help, you have to pay them by the end. We had a man pull us aside to show us a different tannery than the main one. We followed him and he did show us something cool, but he had a pout-fit when we gave him what we thought he earned for his time. Mind you: we did NOT ask for anything. You even have to be careful what you take a picture of because some people charge for you to take pictures of their shops. All of these and many more instances in one day was exhaustingggggg. Add in the fact that the medina is a huge maze, and it’s probably the place you’d want directions the most. 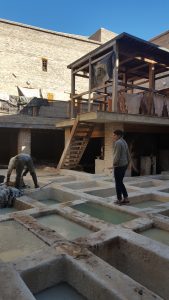 I’m sorry, but maybe the grossest place I’ve ever been

The tanneries in Fez were…interesting.  The main tannery is called Chouara, but there are a few others, and this is where leather is dyed and processed. To view the main one, you have to enter a shop (we went to number 10 for future reference). Each tannery is made up of a series of cement holes filled with a mixture of water, pigeon poop, and animal pee. Soaking in this mixture are a bunch of sheep, camel, and other skins. The workers migrate from tub to tub physically mixing the skins around, so, yes, they are soaking in this liquid all day. BUT THE SMELL is unforgettable…in a bad way. As a whole, they are not the most pleasant experience, especially if you think of all the animals that died for this. Cultural experience though, right?

The medina is much bigger than the one in Marrakech, and supposedly much more authentic. Blows my mind how many vendors there are in a small amount of space. And how do they all make money??? My thought was that knowing 50 dirhams a day is a somewhat standard income, it really only takes selling one or two things to survive. Could be wrong.

Food in Fez is yummy but food poisoning is quite common. Both my roommates sadly got hit with bouts of it. Add that to two 4 hour bus rides, and the general stress of Fez, it was a tense few days. We were excited to get back to Marrakech. 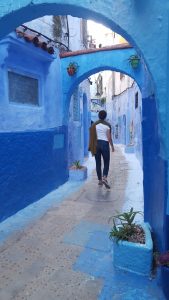 Chefchaouen is a small village in the mountains, north of Fez, known as the ‘Blue Pearl’ because it’s painted mostly blue. We took a 4 hour bus ride there (round trip $14 through CTM). It was a bit of a rocky ride so take caution if you get motion sick. That being said, it was BEAUTIFUL! So many expansive, green valleys, with a mountain backdrop.

We stayed in Hostel Baraka, owned and operated by an English woman. It was in the heart of the small medina, right along a small blue street. It had shared rooms and not many bathrooms, but a beautiful rooftop terrace. One of the most memorable moments from Chef was listening to the call to prayer from the roof as the noise echoed through the city and mountains. 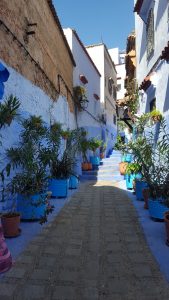 What to do in this city? Take bomb Instagram pics, duh. But really, walking around the blue alleys is what you do. Unlike the other cities, I kind of felt like I was walking through someone’s neighborhood. There were kids running around playing soccer, women carrying their laundry up and down from the river, and people eating couscous everywhere (Friday=couscous day). We got some amazing couscous and fresh bread at Café Assaada.

Chefchaouen is much more my speed. No one talks about the crazy hills that make up the city or the mountains that surround it, but don’t be fooled, this place is nestled perfectly onto the side of a mountain. We hiked up to the Spanish Mosque for sunset #worthit. I could have spent much more time in this city, instead we hustled back to Fez for our flight out, only spending one night.

Lemme just vent for a moment. The airport process in both Marrakech and Fez was hands down the most disorganized I have ever experienced. We got to the airport two hours ahead of time for this one hour, domestic flight, and made it with 15 minutes to spare. We counted: on the way back from Fez to Marrakech, between both airports, our bags and/or passports were check 11 TIMES!!! Lines everywhere, random security, and no sense of urgency from anyone.

I feel like I crapped a lot on this week, but I am really appreciating the cultural differences and challenges that Morocco has presented. That’s what I’m here to do is learn. And while I had my experience in Fez, others in our group really enjoyed it and other travelers thought Marrakech was worse, so don’t count it out entirely. I just will be J

One more week here and I hope it’s a slower one. Time to relax a bit before PORTUGALL!!!