Sweat a lot this week while trying to find my stride here in Vietnam. The heat/humidity is no joke. Also had my favorite meal of the year!

Week Summary (finally slowed down a little…just a little :P) 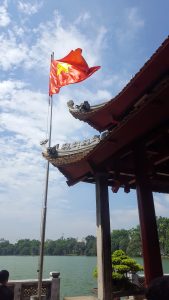 Views from Temple of Jade Mountain

Hard to capture how packed this market was

This week felt like a mental win for me. Learning a hell of a lot. And hey, saw some blue sky!