I knew this year would fly by but holy crap, this is my eighth city! This week was really defined by the Parea-bod challenge, a fitness competition amongst our group. For those who wanted to participate, we each contributed $10, got partnered up, and between the two of us have to get as many points for workouts as week can. I’m exhausted but this was the push I needed, Japan was not the best wellness month.

Anyywayyy, more importantly, Kuala Lumpur (KL) is proving to be very unique. Because of Malaysia’s location on the southern coast of Asia, it historically served as a stopping point for traders between India and China. As our city team put it: “these people would stop and just never leave”. Today, it is truly a melting pot of cultures and is hands down the most diverse place I have ever been. The primary 3 groups are Malays, Chinese, and Indians. But it doesn’t stop there; Malaysia was colonized by the Portuguese (woot woot!), Dutch, and British so there are populations of each of those, as well as immigrants from all over Asia. Despite some tensions, they seem to have found a way to all live harmoniously. Fascinating. 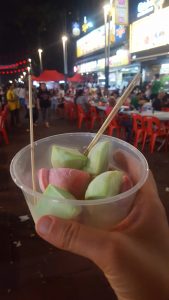 Love me some mochi ice cream

My friend and I had already paid a cover downstairs, thinking it would get us into both, it didn’t. When we got to Altitude, we asked if we could just take a look to see if it was worth paying again. While we were looking, we caught the manager (who had already given us mojitos downstairs) and gave him a bit of feedback on the miscommunication. Meanwhile, this bartender comes over and summons my friend and I to this reserved area. We were greeted by three older guys who offered us food and drinks. Wanting to avoid the cover and curious about the whole thing, we obliged. Mind you, we were in a reserved area but still on a crowded rooftop. The guys were super friendly, and we were soon joined by more Remote Year people. Well, come to find out, one of them was a high profile dude in Malaysian politics (confirmed by a later Google search), one of them was a former Chief of Police, and the other was a rich dude from Australia. We had a blast laughing with them and oh by the way, we had the best view of the fireworks down below us at midnight. Theennn they invited us to another reserved party and we rode over together in their private van. We finished the night on beer street and closed down the bar. Welcome to KL!

So Malaysians are super friendly, right? Free food, free rides, free drinks….but like, when does that cross the line to creepy? Being cautious and aware for sure. Anyway, I’m soaking this city in for all its quirks!