This week in Malaysia was cut short because, MAMA I’M COMIN’ HOME! However, the last three days were super special, and it was way harder to say goodbye to Kuala Lumpur than I thought it would be. Despite being turned off by the cat-calling, staring men and conservative values of most people, I fell for the diversity, the kindness, the amazing food, and the rooftops of KL. There’s also way more to explore of Malaysia that I will have to come back for! 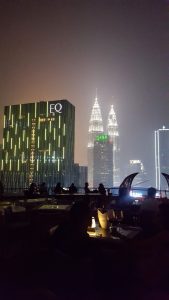 Drinks on a helipad 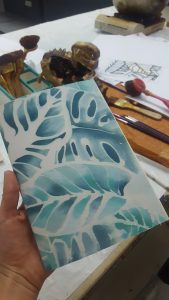 So that’s it! I have completed 4 months in Asia. What a whirlwind. Kuala Lumpur was the biggest and best surprise, and though I still liked Chiang Mai better, I would go back to both Thailand and Malaysia.

Before coming on Remote Year, I had a lot of apprehension about Asia: it’s far, it seems dirty, it’s so different, Asian tourists can be annoying, the food may be good but it also might get me sick, the languages are all symbols, the pollution is bad, etc. Part of me thought I would not make it past four months of RY. Well, I’m here to tell you that parts are dirty, parts smell (mostly like durian), Japanese and Vietnamese are all symbols, and yeah it was HELLA FREAKING hot. But, Asia cannot be classified the same across the board and I am SOOO glad I did not skip it. Each of the four countries we went to were so different, each with their own beauties and challenges. Vietnam was a sweaty, motorbike, chicken adventure. Thailand was a temple party with the best noms on the planet. Japan was a quirky, colorful, yet extremely organized and clean ride. Malaysia was a melting pot of people, food, and religions topped (literally) with bars and scooters.

Some of the little things I’ll miss about Asia:

I will say, I am ready to not work late at night and a change of scenery will be nice. Anyway, what now?! I have a week at home, primarily to celebrate the wedding of my best friend Alexis (OMG!!!!!!!!!!!!!!!), then back to Parea for four months in South America!

Here’s to embracing this journey and all the crazy things it’s thrown at me! And here’s to quality time with family and friends!