This week was a reset week. With a wild end to Santiago, I took ample time this week to chillllll. But, of course chilling in Remote Year still means doing lots of things…just less than usual J So far, Lima is great! Also, HAPPY HALLOWEEEEEN! 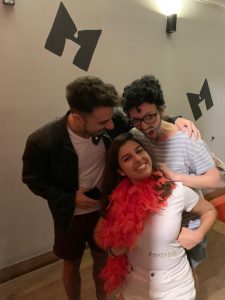 We are living and working in the Miraflores district, one of the 43 districts in Lima. It is quiet, safe, residential, and because of all of these things, not the cheapest. Don’t get me wrong, I enjoy the area, but I could be living in any city, there’s nothing super special about it. With the one exception: a beautiful cliff walk park along the coast. Lima is on the ocean and curiously, has huge cliffs going down to the shore. So there are almost two boardwalks, one on the actual coast, and another some feet above along the cliff. Anyway, the park is 10/10, complete with running/bike paths, a skate park, tennis courts, and lots of doggos.

Our workspace is Comunal, and we have access to multiple locations! Fun to switch it up. Also, because Parea arrived early to Lima, there is another Remote Year group here! Been interesting to see how the two groups differ and vibe. It’s been fun to have them around and do shared activities, but let’s just say I have a greater appreciation for Parea!

After kicking off Lima with a fun night out, followed by a day of not leaving the house, this is what I’ve been up to:

This is the life of a digital nomad

What’s missing from these lines is the bout of stress I have had this week. A culmination of complicated relationships, a new city, changes at work, and the realization that I only have three months left, have all left me with low energy and on edge. I am having a constant battle in my head, trying to push through all the thoughts overwhelming it to stay present. Taking it day by day.