Week two in Peru! Lima is beautiful, but I was feeling like I was trapped in the Miraflores/Barranco bubble. It is a nice bubble but a pretty normal one. This Saturday changed it; the day brought a trip to the district of San Juan de Lurigancho that showed me a totally different, refreshing  side of Peru. Special day.

Activities of the week:

Our ‘Make a Miracle Experience’: 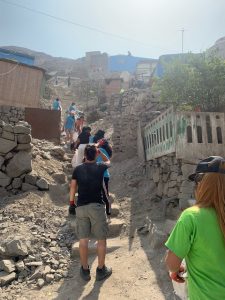 Team work to get the walls up the hill

I was really worried that the Make a Miracle experience would be every white savior type mission trip you see: rich white people come in, hug and take pictures with lots of kids that later get posted on social media, then build a house in a way that may or may not be useful or sustainable for the area, then leave with a chip on their shoulder that they did something good. I am happy to say that it was not like this. If the 5 of us were not there that day, the house still would have been built by the people of the town and the scholarship students of Make a Miracle (part of earning a scholarship is a requirement that you help in projects). It was more that we were welcomed into their world for a day and able to provide some extra hands. The kids had a chance to practice their English, while we practiced our Spanish, and we all came together in group activities. The kids also did not gather that day just for us, was just a normal Saturday routine. And hopefully, we can help make people aware in hopes of more donations for more scholarships. 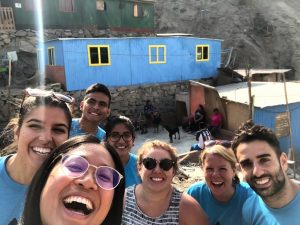 As for the area itself, I have never been somewhere so dry that also has people living in it. There was not a blade of grass in the whole area. We left covered in sand and dirt (and paint). Not saying it was bad, just different. The outskirts of the town were all a series of staircases and wood walled homes. Oh and of course, the small bodegas (convenience stores). I also don’t want to misrepresent the town: I was not struck with an overwhelming sense of ‘holy, poverty’. These were normal people, educated or trying to be, and hard-working. I got the impression that outside Lima, this is how people live and it’s what they know.

I can’t take credit for this realization, as it was a Parean who said it, but it was truly cool to see the community of San Juan come together to build this home. With not a lot of material goods to show off, they all seemed to find joy in the company of each other. I left that day with some Peruvian slang words, assurance that I need to step up my Spanish lessons, new friends that can stay connected on social media, and I hope an earned sense of accomplishment that I was able to contribute even a small amount to someone’s new home.

After a lazy Sunday at home, we are on to week three in Lima! As always, don’t forget to check out this week’s photos.