Medellliiiinn, what up!?! I am literally in love with Colombia, so far. First impressions? People in this city are SUPER friendly, weather is amazing (like 80 and sunny during the day), arepas de choclo are maybe the best food invented, so. many. hills (more like mountains), and all with the constant background salsa music. After a bit of a slump in Lima, I’m back on track. 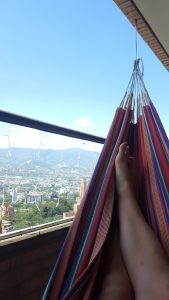 This month’s apartment is a three-bedroom on the top of a huge hill (no, but seriously so steep, my legs oy). Reward of being up so high is a stunning view of the city and sunset. And we have a hammock to take it all in. We keep the balcony doors open for tons of sunlight and fresh air. The building also has a pool/hot tub and gym so definitely worth the climb.

We are working out of Selina Coworking space. You may have heard the name before, there are Selinas all over the world. Very trendy and hip. It’s located right next to a beautiful creek/waterfall and is in the El Poblado neighborhood. The area itself has a bunch of cool cafes, boutiques, and bars. And oh by the way, it’s a literal urban jungle with all the greenery.

A week in review…

Yeah sooooooo, I’m already dreading leaving this place. But excited for what the next 3 weeks brings!