I enjoyed a nice holiday with Parea, but I have to say, I was really missing home this week. I was reminded how much I love this week of the year at 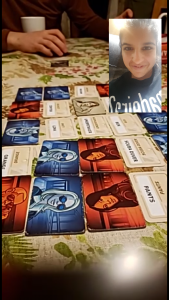 Videochatting in to family game night

home as I watched all my family arrive to Franklin and celebrate without me for five days. Thanks to technology, I’ve been able to video chat a lot and even take part in a board game night. As close as I’ve gotten with my Remote Year family, no one can replace actual family. And while the heat of Colombia was amazing, it did not make it feel like Christmas. C’est la vie, it will make me appreciate it that much more next year!

Currently writing this from an airport lounge. We said checked out of our apartments at 3pm, got to airport at 3:45 for an 8pm flight. We were here so early that security wasn’t even open. The flight was then delayed two hours…then another hour..then another 2 hours. So if you do the math, that’s 9 hours at an airport. Thanks Remote Year and Interjet.

And that’s that! Month 11 done. Holy hot damn. Minus Lisbon which is on a different level, this is the first place I really wanted more than the allotted time in/didn’t want to leave. So much more of Colombia to explore, and Medellin was the perfect home base! Also my apartment, that view, the natural light, gym downstairs, amazing. I can’t wait to be back!

Mexico, here I come….well if this flight ever takes off!